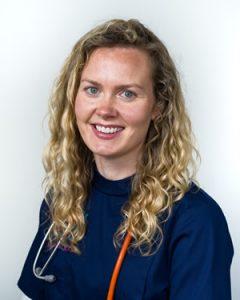 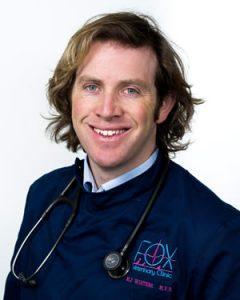 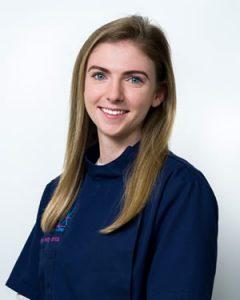 Ciara qualified as a vet from UCD in 2018 and joined the team later that October. She is a fantastic vet who spends a lot of time in the operating theatre! She enjoys consulting just as much as she enjoys operating. She has big soft spot for retrievers as she is a proud owner of Jessie, a very cute golden retriever. However, she has a love for all creatures big and small! During college she really enjoyed her mixed animal placement but decided small animal medicine was the route she wanted to take. Ciara will always do her best to deliver the care necessary to help your furry friend on their road to recovery!

Outside of work, Ciara enjoys going for long walks on the beach with her furry pal Jessie.

Kimberly graduated as a veterinarian surgeon from UCD in 2001. She holds a previous BSc in Animal Science from California Polytechnic University, the US state where she is from, and completed the Animal Keeper’s Course at the Los Angeles Zoo. Before joining the Fox Veterinary team this year, she has worked in small animal veterinary hospitals in Dublin for over 20 years. Kimberly enjoys all aspects of general practice but has particular interests in soft tissue and orthopaedic surgery. She also has a passion for small animal exotic medicine. In her spare time, she enjoys travelling, playing tennis, and going out hiking with her Jack Russell terrier, Hailey. She also has two cats and four rabbits.

Aine qualified as a veterinary surgeon from UCD in 2018. After qualifying she worked in a mixed animal practice in Donegal for two years, before returning to her home county Dublin and joining the team here at Fox Veterinary Clinic. Aine is interested in all aspects of veterinary care and enjoys consulting just as much as she enjoys operating.

Outside of work Aine is never far from the GAA pitch, playing football with Skerries Harps. She also loves walking on the beach with her border collies Jessie and Alfie, who also often accompany her to work.

Tara graduated as a veterinarian surgeon from UCD in 1996. She joined the Fox Veterinary team under the previous owner back in 2007. Tara also works as a veterinary surgeon in the Pet Emergency Hospital based in UCD. In addition to this she is a teacher and head of the Animal Care Department at Dun Laoghaire Further Education Institute. She enjoys all aspects of general practice but has a keen interest in surgery and emergency medicine.

Outside of work Tara enjoys play writing and has produced several plays. She also enjoys spending time with her two cavachons, Numi and Luna.